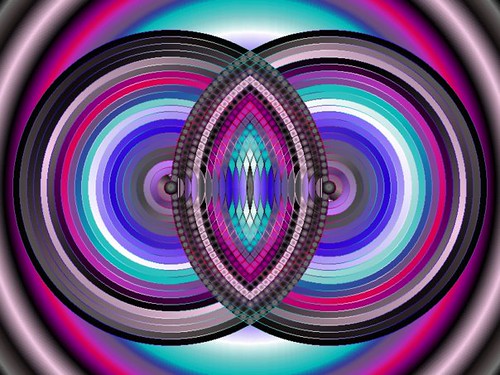 One upon a Creation, One turned into Three, defining Two, who in Truth remained but One

To all the talk online and in books about what is often portrayed as opposition and battling between the Divine Masculine and Divine Feminine and especially between human male and female genders, this is important:

The two are united within as three while in fact still being One and the One, and operating as two in duality, Creating all and birthing everything.

One must see the Divine dualism as the trilogy of One, and only as different facets of expression for the Unity which can but be ONE.

The same principle applies between all expressions seemingly in opposition and competitive status, which need to turned around and embrace their common intersection which gives them existence: mankind and nature, male versus female, light versus dark, positive versus negative, spirit versus matter, electricity versus magnetism, matter versus anti-matter, right side politics versus left side, Creator versus Created, unbridled self-centered Capitalism versus intense Social consciousness, all forms of tribal identification and competition, etc…; they all need to turn around from being back-to-back in opposition and ignorant brutal raw competition within the illusion of separation, towards being face-to-face in awareness, observing the polar opposite side with the perception of it all being also one’s Self.

We need to fall in true Love again between all polar opposites and feel that we are but falling in love with our own polar expression of our deep self which is us.

This can only be achieved if and when we embrace each other’s polar expression with full comprehension as we feel what it is like to be that opposite facet by connecting deep within where we possess and potentially express the same expression, and then naturally project outward the full deserved respect and Love to that polar side of us which allows for the miracle of Life to exist as the One’s Self, our true Self within, through the intersection (observation of entanglement of twin soul expressions).

Evil only manifests when we forget this and ignore and divide evermore. Chaos, imbalance, violence and suffering ensues.

Love is when we see each other as self and then unite in perception and feel deep tolerant loving and fully caring awe at the kaleidoscope of facets imprinted on either sides of the same coin of paralleled entangled n dimensions, n being potentially infinite.

So if you “love as yourself the other polar perceivable opposite expression, you are but loving yourself; and if you dislike of even fall into hatred towards that polar opposite expression, you are but disliking your Self.” In this chaotic and very dangerous period, we all are in dear need “to Love the other polar expressions as One’s Self, otherwise hate and death shall overcome and ultimately extinguish Love and Life!”

We are in dear need to love the “other” as one’s self, as the TRUE Self of who we all are: The One and Only manifesting the many who IS – not are – but ONE because that it all It can BE!

This perception is the only one we need to embrace as Truth in order to fight and truly heal the ultimate schism and illusion of true duality which can truly destroy us between facets and genders and other polarity poles: the trilogy who becomes two but is in reality ONE.

We need to feel, respect it, and operate it as such.

This is all internal work which then reflects magically upon the external reality.