by Gerald O'Donnell | May 1, 2011 | Holiday Messages, Messages From The One, Timely Messages | 0 comments

Important: During 15 days of very intricate and intense Higher work upon the Temple Mount and other very special energy points in the Holy city of The One-and-Only: Jerusalem, Gerald O’Donnell received on May 1, 2011 a critical direct Message from the Oneness. The One-and-Only needs His message to be spread across all of this Creation. He hopes that you realize that it is your solemn Loving duty to do so and expects you to send it to as many entities as you possibly can. Please spread and post this as wide as you possibly can. Time is very short and the stakes are great. You must get involved. More will be explained in the weeks and months to come. 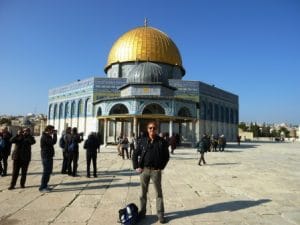 Direct Message from the One-and-Only addressed to Mankind.

This is a message from the One.

It has been acknowledged in the realms who took care of Creation that this Dream has gone outside its preset rules and boundaries for quite a while.

Much suffering could have been forsaken had man understood its role upon Creation.

No one wishes ill upon the children of the IS.

Nevertheless, the way by which they have chosen to act must be changed, totally so, so that this realm could be given a chance to continue.

Great sadness beseeches the One as He recognizes the iniquities and distortions which man forces upon his family.

In the desire to affect His Creation, The One needs to bring about the rapidly evolving set of Higher rules and operations.

Were it not to be established, this realm will be erased permanently from the totality of The Mind.

Nothing can nor will stop the desires of the One and Only Life there IS.

To think otherwise is pure folly and will be proven so.

Soon man will be meeting his Maker while remaining in a biological form and will not be doubting anymore that The One Himself is permanently Present in and outside of mankind.

When this happens, the end to this page which we have helped write in the book of Life will occur and we will all together enter into a new era where man will be seen as a Child of God and be cherished as such.

There shall be peace: The Peace of God.

There shall be freedom: The Freedom of the Oneness.

There shall be purity, joy, and a lack of concerns, because The One and Only will reign and connect to all.

There is no reason to doubt this anymore.

Much of what man encounters happens in this world now as the One wishes it to be.

To deny it, is to deny the very essence of Creation.

The Godliness is asking His children to finally unite before events are made to occur that will very painfully force such action upon the ones who will be made to remain and rebuild.

The One and Only needs to allow for His word to spread.

He has known before of the difficulty He would encounter as He tries to bring His Creations to a greater sense of what the One has Dreamed for them which is but full unity and co-action.

Nothing will prevent His bringing such a state about.

He is warning mankind not to divide again His point of contact to this Plane which is located in His city: The City of One: Yeru-Shalem.

Were this advise not be heeded, man will encounter the fury of Oneness unleashed upon his reality.

Nothing will change this decision.

Great imbalances and fractures have occurred in the fabric of this and many more Creations causing great sorrow and painful damage to the perfection with which nature operates.

Such a state is not going to continue as The Only True Reality finally shows Itself.

Denying that God wants to preserve His Creation is to deny God.

All entities who wish to do so will be erased from His Mind.

Know that The One Loves you more than you could ever love yourself for He Created you and seeded your being.

Understand that He needs now to intervene directly to preserve all of you and all of His Creation.

Have faith in the Oneness, and Oneness shall reward you.

Do not ever fall into the trap of despair.

Know that your Creator is within you and with you.

These are the times which have been foretold for eons – the time when God will embrace all of Creation into His bosom. Nothing can change that.

Many of you have recently risen preaching violence against your fellow man, often in the name of distorted beliefs and false gods.

The One and Only has watched the uncontrolled suffering which has been caused by the use of force and violence, often portrayed as inspired by Him.

He will not ever allow such acts to continue to be present in His new world to come.

The ones who are still embracing hatred towards their fellow men and groupings thereof will have to face The One and Only.

They all will be erased, and not even be remembered.

Soon only loving entities will exist.